Downtown Ottawa was once again crowded with people draped in the Maple Leaf on Friday, but this time anti−government protesters were among a minority as the city hosted its first in−person Canada Day since the beginning of the pandemic.

There was a celebratory, if low−key mood in the capital, where the main holiday events were moved away from Parliament Hill to nearby LeBreton Flats Park, and Place des Festivals Zibi across the Ottawa River in Gatineau, Que.

Large numbers of police were present throughout Ottawa’s downtown. People hoping to enter the Hill were screened with metal detectors and bag searches.

At noon, a group of people opposed to public health mandates and the Liberal government gathered in front of the Parliament Buildings on Wellington Street, where they chanted the now−familiar cry of "Freedom." The group mingled among those lined up to take part in traditional Canada Day celebrations. 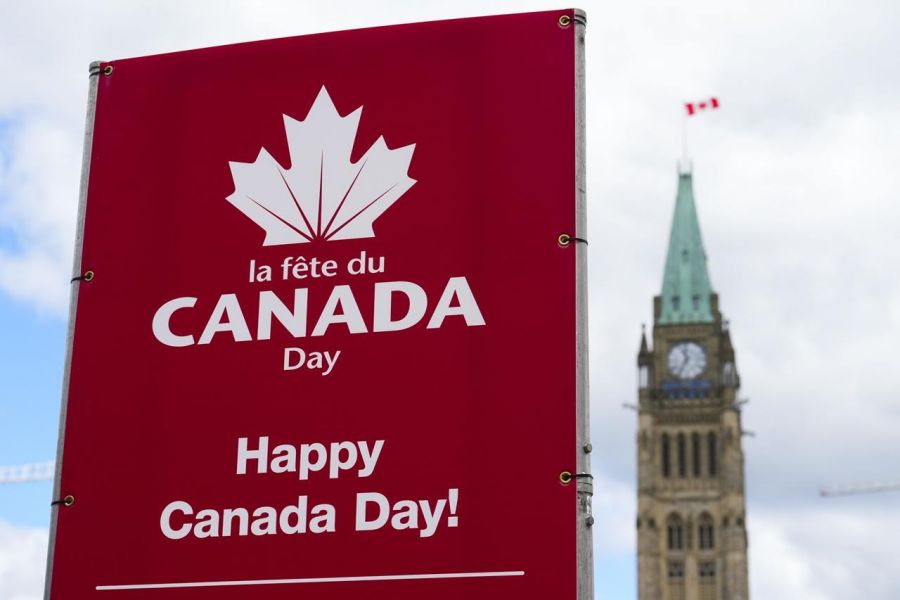 Officials had warned there would be zero tolerance for "unusual noise," blockading roads and sidewalks or setting off fireworks this weekend. But attempts to enforce one bylaw led to a tense situation in front of the gates to Parliament.

The brief clash centered around two women with a group called Stand For Thee, which had been handing out copies of the Bill of Rights and calling for the arrest of Prime Minister Justin Trudeau.

The pair were selling merchandise from a table on the sidewalk when bylaw officers told them to stop, citing a the city’s use and care of roads bylaw.

That order prompted a crowd to start shouting and chanting. Bylaw and police officers retreated as the crowd pressed in, chanting, "Rule of law!" But the group eventually removed the table.

One woman, who refused to give her name, told the crowd: "Everything they’re doing is a violation of our rights."

"It’s a violation of the Criminal Code. Do your job, go into the Hill and take down the people that have created tyranny."

No one took her up on that suggestion. The protesters dispersed not not long afterward. In all, the disruption lasted about 20 minutes.

A much larger group later marched through the downtown. Police shut down intersections and escorted hundreds of marchers who chanted, danced and called for Trudeau’s resignation. They gathered at the National War Memorial east of Parliament Hill, where they sang O Canada.

Meanwhile, the vast majority of people in the downtown were there to enjoy the warm day, as the sun came out late afternoon. Families strolled about the closed−off streets eating ice cream, snapping photos and taking in street performances.