'They are trying to kill us': Alberta city at odds with homeless outreach group

An outreach worker and a nurse lean over an orange mesh fence to speak to a woman on the other side as tents flap in the cold wind at a homeless camp in central Alberta.

Someone is in trouble. He’s described as bloated, purple and losing consciousness. Workers with the Open Door Association risk being fined if they enter the camp, which was set up in August on a plot of land owned by the City of Wetaskiwin.

One of the workers calls for an ambulance. They debate whether or not to jump the fence.

Wetaskiwin’s only emergency housing shelter, the Open Door 24/7 Integrated Response Hub, was closed after the city terminated its lease.

Its clients then set up camp outside a local food bank. The city shut that down, too, and agreed to move the vulnerable population to land behind a Walmart on the city’s outskirts. 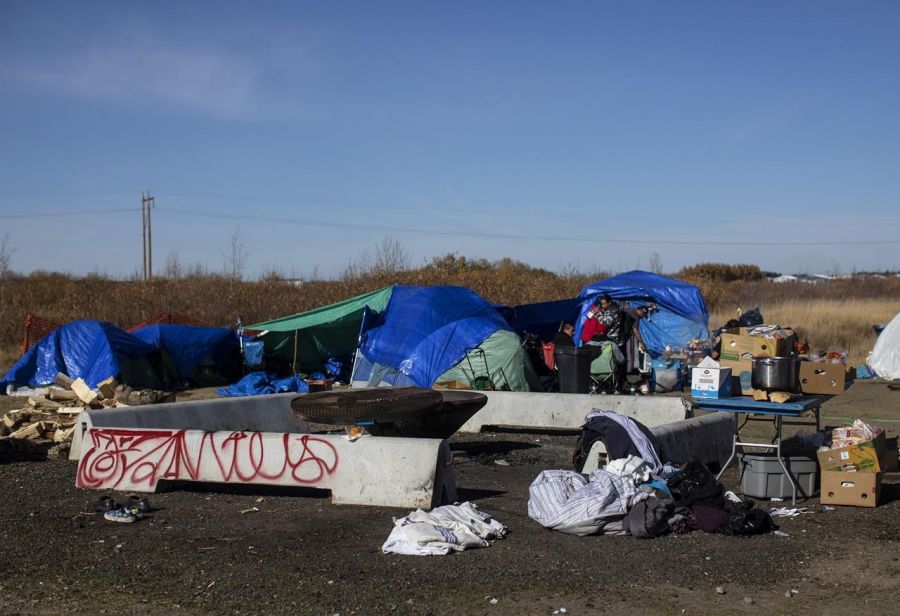 While some health workers and community members can access the camp, the city singled out Open Door as not being allowed to provide on−site support.

In mid−September, Alberta Health Services notified the city that the encampment, where about 60 people sleep each night, did not meet minimum housing standards under the Public Health Act.

The health agency directed the city to provide lighting and a plan to deliver firewood. The city said neither was possible, but agencies would be allowed to deliver wood from the landfill.

A senior employee with AHS, who asked not to be named, described the site as "worse than a refugee camp."

There is no running water. Two portable toilets are close to overflowing. Trash and belongings are scattered. Tents are tethered to the ground with shards of wood and COVID−19 poses a constant threat.

As the sun lowers, people huddle together around fire pits. Some burn whatever they can find — cardboard boxes and trash. It’s cold and expected to get colder. Temperatures dip to below 0 C overnight.

"They are trying to kill us," said Kristen Anderson, 41, who lives in one of the tents. "I know that’s a blunt word but there has already been people who have passed away in this camp."

Since the camp was erected, Open Door executive director Jessica Hutton said four clients have died. One died by suicide on the nearby train tracks. Two died from untreated medical conditions and another overdosed on drugs.

When Open Door opened the Hub in a downtown civic building last November, it provided a range of services including medical care, housing and addictions supports, food and shelter. Its data shows about 74 per cent of clients were Indigenous with complex medical needs.

Wetaskiwin Mayor Tyler Gandam said council voted to close the shelter after receiving complaints from residents and businesses about crime, open alcohol, drug use and assault.

He said Open Door failed to mitigate harms to the community. The city now refuses to work with the association and its workers will be ticketed for trespassing if they go in the camp.

Hutton did not say if staff have entered the camp, but said none have been ticketed yet. She added the city’s concerns are exaggerated.

AHS spokesman Kerry Williamson said the health authority is part of a group focused on finding solutions for the homeless in Wetaskiwin, but it does not direct municipal legislation.

In a video of a special council meeting about homelessness on Aug. 19, one Wetaskiwin councillor said he wants to know what other communities unhoused individuals are coming from.

Justin Marshall, press secretary to Alberta’s minister of community and social services, did not say whether funding has been secured but that progress has been made to "advance a solution for shelter services."

RCMP Const. Shaun Marchand in Wetaskiwin said crime in the downtown had been trending down in August, with a slight increase in shoplifting.

Hutton with Open Door said the downtown location was never ideal. The group had attempted to purchase a more suitable building, she said, but the city defeated a zoning change, effectively severing the private sale.

"People are dying and we have their medication," she said.

A landowner whose county property backs onto the camp allows Hutton and her staff to make the 10−minute drive through a bumpy field to reach the fence at the camp.

They pass water, food and medication across the barrier while trying to connect clients with supports.

Hutton said they can’t do any proactive work to thwart domestic disputes, confrontations and medical emergencies.

Gangs prey on people in the camp, she added. Some in the camp say community members drive by and yell racial slurs. Some also have weapons — guns and knives — to protect themselves.

Anderson said living in the Hub was 10 times better.

"There was staff constantly on site. We had warmth, we had food," he said. "It wasn’t overly elaborate, but it was a fairly safe place being homeless."