PM Trudeau responds to Trump's controversial tweets about US congresswomen

President Donald Trump's suggestion that four female members of congress should go back to where they came from is not a sentiment that Canada's Prime Minister believes in for his own nation, he says. 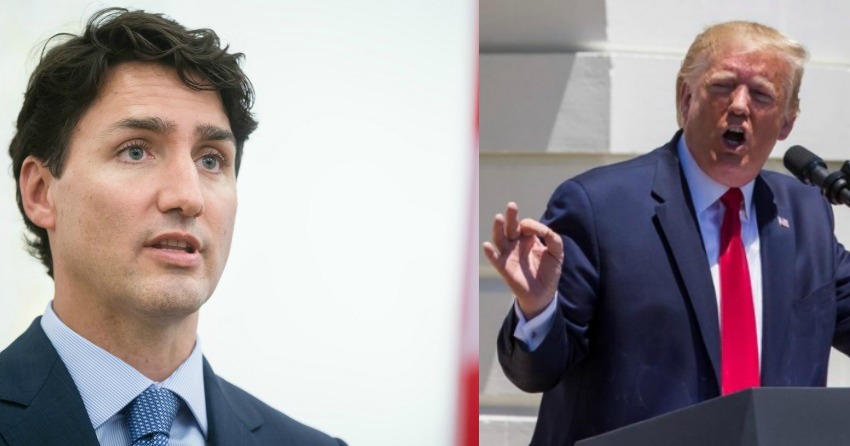 On Sunday, President Trump called out "'Progressive' Democrat Congresswomen" in a thread of tweets, who were not listed by name but have been widely understood to be Reps. Alexandria Ocasio-Cortez of New York (who was born in New York), Rashida Tlaib of Michigan (born in Detroit), Ayanna Pressley of Massachusetts (born in Chicago) and Ilhan Omar of Minnesota (who was born in Somalia and moved to the United States with her parents as a child).

"So interesting to see “Progressive” Democrat Congresswomen, who originally came from countries whose governments are a complete and total catastrophe, the worst, most corrupt and inept anywhere in the world (if they even have a functioning government at all), now loudly and viciously telling the people of the United States, the greatest and most powerful Nation on earth, how our government is to be run," President Trump tweeted.

....and viciously telling the people of the United States, the greatest and most powerful Nation on earth, how our government is to be run. Why don’t they go back and help fix the totally broken and crime infested places from which they came. Then come back and show us how....

"Why don’t they go back and help fix the totally broken and crime infested places from which they came. Then come back and show us how it is done. These places need your help badly, you can’t leave fast enough."

....it is done. These places need your help badly, you can’t leave fast enough. I’m sure that Nancy Pelosi would be very happy to quickly work out free travel arrangements!

All four congresswomen who are believed to be the targets of his thread are left wing Democrats that are non-Caucasian. All four women replied to Trump's tweets.

Mr. President, the country I “come from,” & the country we all swear to, is the United States.

But given how you’ve destroyed our border with inhumane camps, all at a benefit to you & the corps who profit off them, you are absolutely right about the corruption laid at your feet. https://t.co/HLKQCotR8T

As Members of Congress, the only country we swear an oath to is the United States.

Which is why we are fighting to protect it from the worst, most corrupt and inept president we have ever seen. https://t.co/FBygHa2QTt

THIS is what racism looks like. WE are what democracy looks like. And we’re not going anywhere. Except back to DC to fight for the families you marginalize and vilify everyday. pic.twitter.com/vYzoxCgN0X

P.S. @realdonaldtrump, keep talking, you just make me work harder. I'm proud of my Palestinian roots & a WEAK bully like you never wins. This is what America looks like ⬇️.

Trudeau did not mention Trump by name when asked about the president's recent Twitter comments while making an appearance at a military base in Ontario on Monday, but he did say that Canadians and people around the world “know exactly what I think about those particular comments."

With files from The Canadian Press