Over 500 foreign objects found inside patients after surgery in Canada

Canada’s healthcare system has been put under the microscope – and it’s not doing so well in some areas.

The Canadian Institute for Health Information (CIHI) data show that the country is in line with the international average on 32 out of 57 indicators, and above average in 13.

But there are 12 areas in which Canadian healthcare is rated as below average when compared to other OECD countries (ie, wealthy ones).

One of the most eye-catching indicators on which the country is doing poorly is patient safety.

Canada is the worst-rated OECD country when it comes to foreign objects being left inside patients after surgery.

There were 553 such objects – including sponges, instruments, etc – found in patients between 2016-18. 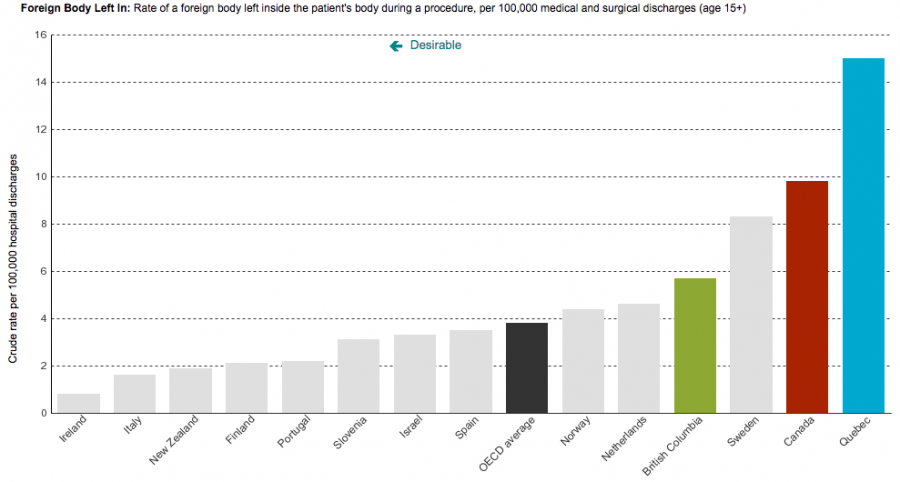 That represents a 14% increase over five years.

British Colmbia’s rate was the lowest in the country and Quebec’s the highest.

The CIHI added, however, that since the USA, UK and Australia do not release similar data, Canada’s abysmal global ranking may not be quite so bad.

Other areas in need of improvement include:

But Canada has considerable strengths, too, such as:

“While Canada’s healthcare systems are often admired, the international comparisons show that there is room for improvement,” Tracy Johnson, director of health system analysis at CIHI, said.

“We are lagging behind OECD countries in areas of patient safety. These are serious issues that are often preventable, and improving our performance in these areas will result in safer care for patients.”

Chris Power, the CEO of the Canadian Patient Safety Institute, added that “every patient experience should be safe.”

“We need to continue to work with patients, providers and leaders to prevent these events from happening,” he said.

“The Canadian Patient Safety Institute leads system strategies to ensure safe healthcare: it is our hope that Canada is eventually moved up to the top quintile of the OECD ranking for patient safety.”