Canadians should wear masks to protect others when in public: Dr Tam

(UPDATE: May 20 @ 10:46 am): Canada’s public health experts are now fully recommending Canadians wear non-medical face masks in public when they aren’t sure they will be able to keep their distance from others.

“This will help us reopen and add another layer to how you go out safely,” Tam said Wednesday in her daily briefing to Canadians on the COVID-19 pandemic.

She said a full explanation of the new recommendation by the national special advisory committee on COVID-19 will be published later Wednesday.

Tam said initially it was believed the novel coronavirus was only spreading from people showing symptoms. That understanding has changed, as it is now known people can transmit the virus days before symptoms show up. Some patients may never show symptoms at all and can still spread the virus to others.

She said in future respiratory outbreaks, wearing face masks might become a normal part of the public health response. She did not suggest she regrets recommending against using face masks earlier. She said the tried-and-true public health measures of testing, contact tracing, handwashing and physical distancing have worked to slow the spread of COVID-19 in Canada.

The shift in advice came Wednesday with the sight of more MPs and cabinet ministers arriving in masks on Parliament Hill for the weekly in-person COVID-19 committee sitting. Prime Minister Justin Trudeau said he will be wearing a face mask whenever he feels he can’t stay two metres away from others outside his home.

Deputy Prime Minister Chrystia Freeland and Conservative MP Garnett Genuis were also in face masks on the Hill, though Genuis was the only one who kept his mask on while inside the House of Commons. He took it off when he stood to speak.

Trudeau’s face mask was on his desk beside him in the chamber. He said he would take it off during the sitting, because he would be a suitable distance from any other MP.

Some countries have made wearing face masks mandatory in public, including Spain, which enacted such a rule this week. Tam said mandatory mask use across Canada doesn’t make sense because the risk is far different in the Yukon or Prince Edward Island than it is in Montreal or Toronto.

She said local health officials may choose to make the recommendation for face masks mandatory in their jurisdictions.

She stressed that a face mask is not to replace other measures like physical distancing, handwashing and staying out of public places when you can. And she said people should see it as a way to protect other people, noting when two people are both wearing masks, they are both protecting the other.

“It is an added layer of protection,” she said.

– With files from Canadian Press

(Original story: May 20 @ 8:17 am): Prime Minister Justin Trudeau has said an announcement on the wearing of masks will be made by public health officials "in the coming hours."

He said the government has been looking at research and the best ways that Canadians can protect themselves from the new coronavirus.

He added that his "personal choice" is to wear a mask when he is unable to keep two metres away from other people. 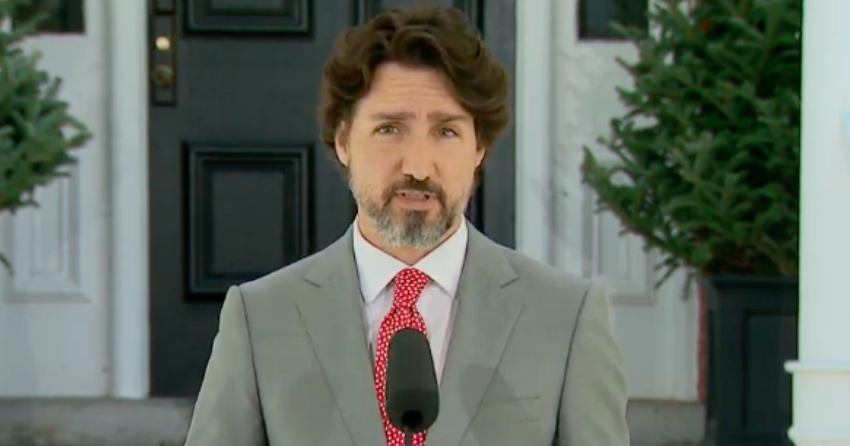 "I prefer to stay two metres away," the prime minister said.

He said he will be wearing one in Parliament this afternoon because it is harder to keep two metres from others in "busier hallways."

"We all need to adjust to what works," he said.

Yesterday, a study was published which showed that saliva can travel 5.5 metres in five seconds if there is a slight breeze.

Spain will on Thursday activate a new law making mask-wearing compulsory in the country, for people indoors and out.

It applies to everyone aged six and over who is not able to socially distance from other people in public.

Many other European countries have introduced similar laws and rules which make the wearing of masks mandatory on public transit.