New post secondary campus to open in Langford in fall 2024 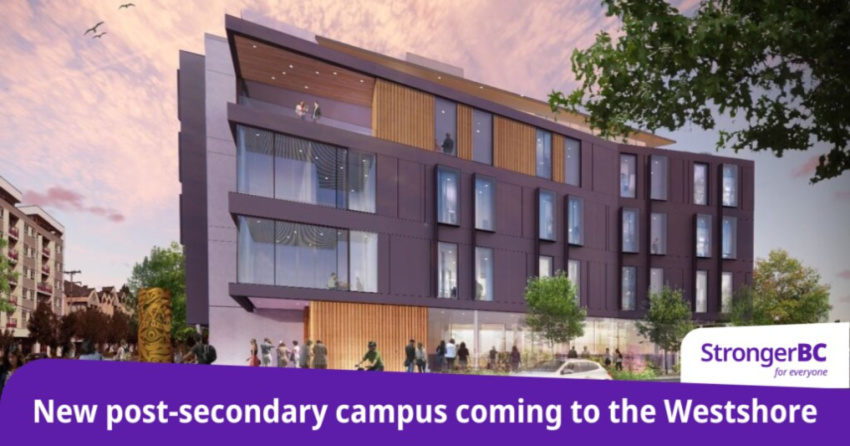 The campus will be located at 798 Goldstream Ave, and will be a first-of-its-kind partnership between Royal Roads University (RRU), the University of Victoria (UVic), Camosun College and the Justice Institute of British Columbia (JIBC).

Slated to open in the fall 2024, the campus will initially take in about 600 students.

By 2035-36, at full capacity, the campus will serve an estimated 1,300 full-time students— including students from First Nations throughout southern Vancouver Island, particularly those on the Westshore, including T’Sou-ke (Sooke), Pacheedaht (Port Renfrew), Scia’new (Beecher Bay), Xwsepsum (Esquimalt), Lekwungen (Songhees) and Malahat.

It will also include space for programming by School District 62.

Programs and micro-credentials offered will include a new common foundations program to prepare students for a variety of fields.

This will be offered for business, hospitality, environmental practice and communications studies at RRU. UVic will offer computer science, engineering and humanities courses.

Adult upgrading and education programs will also be offered from School District 62.

The five-storey mass timber building will include flexible learning spaces and classrooms, student supports, a multi-purpose classroom called the Innovation Studio, and space for Indigenous gatherings.

The $98-million project includes a $77.8-million investment from the provincial government for the construction of the building, and $18.5 million from RRU for the land purchase plus an additional $500,000 for capital costs.

Additional capital contributions include $1 million from the UVic and $200,000 from Camosun.

The City of Langford has committed to invest in parking for the campus, as well as road infrastructure upgrades valued at $27.5 million, including $1.5 million in funding over 10 years for development and support of the Innovation Studio.

As part of the commitment to the project, the city has formed a Langford Education Fund, contributing $75,000 annually for five years to support local youth graduating high school that want to attend post-secondary in Langford.

The project is planned to meet the Zero Carbon Building design standard, the first public post-secondary institution in BC to target this, in addition to targeting LEED Gold certification.