The Victoria Royals will host their second consecutive Eastern Conference opponent when they welcome the Moose Jaw Warriors to the Save-On-Foods Memorial Centre this Tuesday night. 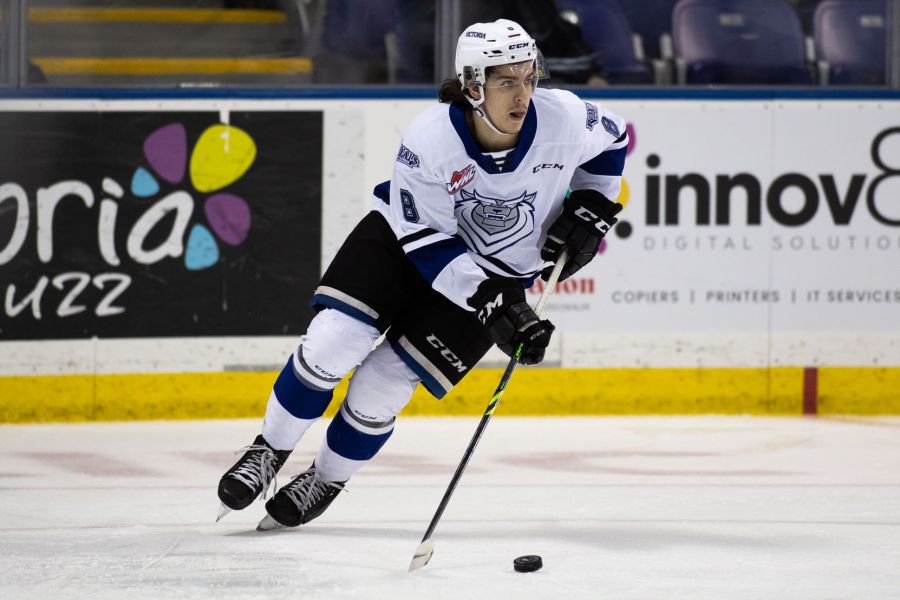 Victoria (3-17-3-0) is looking to rebound from a 9-5 loss in a high-scoring affair against the Regina Pats on Saturday night. A win on Tuesday would go a long way to building positive momentum for the team as they get set to resume divisional play in the coming weeks.

There are a number of positives the team took away from the loss over the weekend, particularly on the offensive side of the puck.

The return of forwards Brayden Schuurman and Marcus Almquist – who combined for three goals on Saturday – gave the Royals front end a much needed boost and should continue to make an impact moving forward.

However, the team will once again be without Almquist for the next few contests as he flew out earlier this week to join his Team Denmark teammates for the upcoming 2023 IIHF World Junior Hockey Championships Division I tournament, scheduled for Dec. 11 to 17 in Asker, Norway.

Defenceman Kalem Parker has also been a valuable piece on the ice for Victoria of late, scoring on Saturday to post points in back-to-back games and providing lockdown defensive coverage on the back-end as he has done all season. The Clavet, SK product currently ranks third on the team with 13 points on two goals and 11 assists in 23 games this year.

The 18-year-old blueliner is eager to extend his scoring streak to three games on Tuesday:

“I feel really good,” said Parker. “When you put goose eggs up for a while it kind of hurts you mentally and you just want it so bad. To finally get one [a goal], it feels good and hopefully it gives me momentum going forward.”

Logan Cunningham is expected to make his fifth start of the season in net for the Royals against the Warriors this week. The Sherwood Park, AB product has made 128 saves on 157 shots through eight total appearances this year.

Moose Jaw (15-9-0-0) has enjoyed a successful 2022-2023 campaign to this point and has won two of their last three games during their current their Western Conference road trip.

The Warriors are led on offence by the dynamic duo of Jagger Firkus and Brayden Yager – both who rank among the top scorers in the league this season.

Firkus, a second-round selection (35th overall) by the Seattle Kraken in the 2022 NHL Draft, has posted a team-leading 31 points on 14 goals and 17 assists in 22 contests this year.

Meanwhile, Yager, a top prospect for next year’s draft, has put up similar numbers with 30 points on 13 goals and 17 assists in 20 games on the season. Slowing down Yager and Firkus will be a key factor in the Royals’ chances for success on Tuesday.

In net for Moose Jaw will be one of their two near-identically named goaltenders, Jackson Unger or Connor Ungar.

Puck-drop for Tuesday’s contest is scheduled for 7:05 pm on Tuesday, Nov. 29 at the Save-On-Foods Memorial Centre in downtown Victoria.