Victoria forward Jake Poole recorded two goals and an assist to lead the Victoria Royals to a 5-2 victory over the Kamloops Blazers at the Save-On-Foods Memorial Centre on Wednesday. 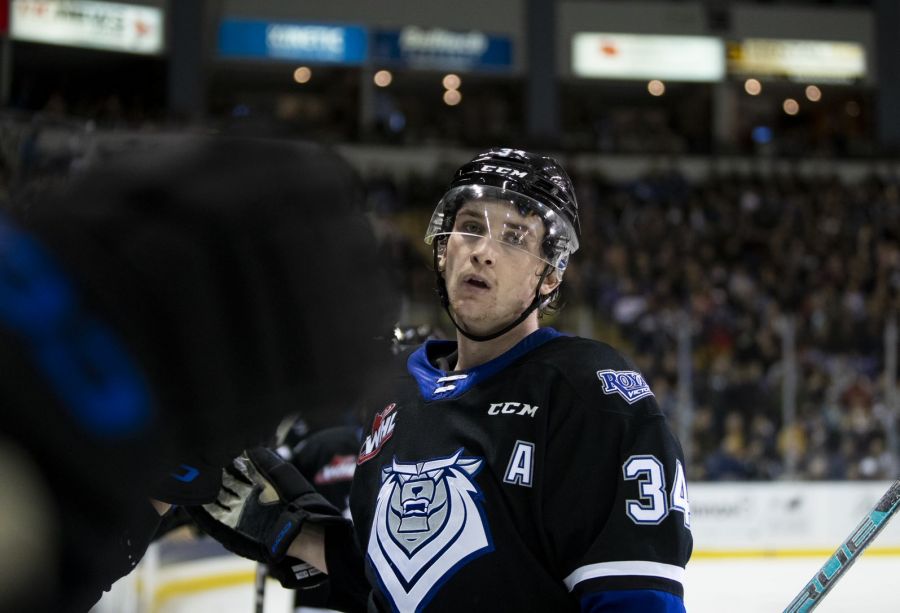 It is the sixth multi-point night of the season for the McAuley, MB product, who leads the team with 26 total points on 15 goals and 11 assists on the year.

Recently-acquired forward Teydon Trembecky also had a strong performance for Victoria on Wednesday, collecting his first points as a member of the club with a pair of assists in the win.

The Royals also benefited from a solid night from starting goaltender Nicholas Cristiano, who stopped 25 of 27 shots on the way to recording his first win of the season and first in a Royals uniform.

Forwards Caedan Bankier and Fraser Minten recorded the only two goals for the Blazers on Wednesday, while starting goaltender Michael Schnattinger made 12 saves on 15 shots before being replaced by Dylan Ernst midway through the second, who would record 21 saves on 23 shots for the remainder of the contest.

Victoria (4-21-3-0) would respond with a game-tying goal by forward Teague Patton (6) at the 1:50 mark of the second, with the lone assist going to forward Teydon Trembecky.

Momentum would shift in the Royals favour following Patton’s goal as forward Tanner Scott (4) would take a cross-crease pass from linemate Riley Gannon to give the home side a 2-1 lead at 3:51 of the frame.

The goals would keep coming for Victoria, as forward Jake Poole (14) put the Royals up 3-1 with a goal at the 4:13 mark. Defenceman Justin Kipkie would collect the only assist on the goal.

However, the Blazers would get one back on a goal by forward Fraser Minten (10) at the 11:37 mark to cut the Victoria lead to 3-2 entering the third.

The Royals would rise to the occasion in the third, with Jake Poole (15) collecting his second of the night at the 4:21 mark to retake a two goal lead. Teydon Trembecky would count his second assist of the game on the goal.

That would be followed by a marker from forward Matthew Hodson (7) at 7:33, assisted by Poole and forward Alex Thacker, sealing the 5-2 win for Victoria.

The win snaps an 11 game losing streak for the Royals and marks their first win over Kamloops since February 2020.

Looking ahead, Kamloops will return home to host the Vancouver Giants this Friday night before once again taking on the Royals at the Sandman Centre on Saturday, Dec. 10.

Meanwhile, Victoria will hit the road for a matchup against the Kelowna Rockets at Prospera Place on Friday, Dec. 9 before facing the Blazers the following night.