Forward Brayden Schuurman scored twice in his return from injury in a 9-5 defeat at the hands of top NHL draft prospect Connor Bedard and the Regina Pats on Saturday. 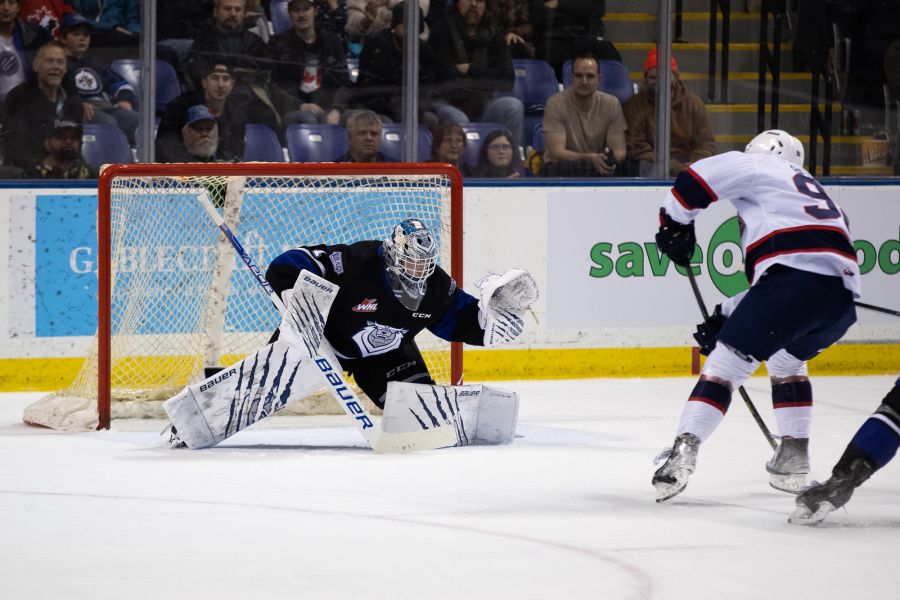 The Save-On-Foods Memorial Centre was the place to be this weekend as a 7,006-strong crowd gathered to get a first hand look at the phenom from North Vancouver.

Fans would not go home disappointed as the 17-year-old Regina captain dazzled onlookers with a three goal, four point performance

Playing in front of a sell-out crowd for the second night in a row seemed to give him an extra boost:

“It’s exciting for our whole group,” said Bedard postgame. “You thrive under that, playing in front of a full building, especially with the energy we had yesterday and today. It’s been a lot of fun so far…I think our coaches would have wanted it a little more low-scoring but for us offensive guys it's pretty fun.”

However, Bedard wasn’t the only Pat to have a big night, as forward Tanner Howe led all scorers with four goals and two assists to cap a six point performance.

Meanwhile, forwards Alex Thacker (three assists) and Jake Poole (one goal, two assists) each led the Royals in scoring with three points each in the loss. Poole successfully extended his point streak to six games.

Despite the final result, Royals head coach Dan Price was happy with his team’s ability to play a more 60 minutes:

“It was a really good game,” said Price postgame. “Very even, as far as shots, chances, special teams. I kno the scoreboard wasn’t even, but they're a very opportunistic team …The key for us is to keep focussing on playing a team game, which you see, as we are starting to get closer to full health is really developing.”

Royals starting goaltender Logan Cunnningham made 19 saves on 27 shots on the game, while
Pats’ starter Matthew Kieper stopped 16 of 21 before being replaced by Drew Sim, who saved all seven against in the third period.

Victoria (3-17-3-0) forward Brayden Schuurman (2) – who made his return to the lineup Saturday after recovering from injury – would respond with a game-tying goal at 10:13 of the period.

Defenceman Jason Spizawka and forward Alex Thacker would collect assists on the goal.

That would be followed by a go-ahead goal by defenceman Kalem Parker (2) at 14:51 of the first to give the Royals a 2-1 lead, with Thacker and forward Jake Poole counting the assists.

However, their lead would not last long as the Pats would tie the game at the 15:45 mark on Howe’s (13) second of the night.

The Pats would keep up their onslaught to start the middle frame, with Bedard (21) scoring his second of the game at the 0:54 mark and forward Stanislav Svozil (4) striking at 1:50 to put the road team ahead 6-2.

Bedard would continue to live up to the hype as the frame wore on, collecting his third goal of the night and 22nd of the season at 10:23 to bring the Regina lead to 7-2.

The momentum would shift back into the Royals’ favour following the seventh goal, with Schuuurman (3) scoring his second powerplay goal at the 11:07 mark, assisted by Thacker and forward Cole Reschny.

Victoria would then pull within three shortly after on a goal by Marcus Almquist (3) at 13:54 before bringing the score to 7-5 following their third powerplay goal of the frame by Jake Poole (13) at 19:20, wrapping up a wild second period.

Forwards Matthew Hodson and Reggie Newman would count assists on the Almquist goal and defencemen Jason Spizawka and Justin Kipke on the goal by Poole.

In stark contrast to the second period, the third would see little in the way of offence as Regina counted the only two goals in the frame.

The first would come off the stick of Tanner Howe (15), at 16:50 marking his fourth goal and sixth point of the night, while the second would be an empty-netter by forward Riley Ginnell at the 17:43 mark to bring the score to 9-5, where it would stand at the final horn.

Looking ahead, the Pats will continue their Western Conference Road trip with a stop in Kelowna this Tuesday night, Nov. 29.

Meanwhile, the Royals will remain at home to host yet another Eastern Conference team, the Moose Jaw Warriors, at 7:05 pm on Tuesday, Nov. 29 at the Save-On-Foods Memorial Centre.