Forward Carter Dereniwsky scored in his first game back from injury as the Victoria Royals fell 3-1 to the Portland Winterhawks on Friday night. 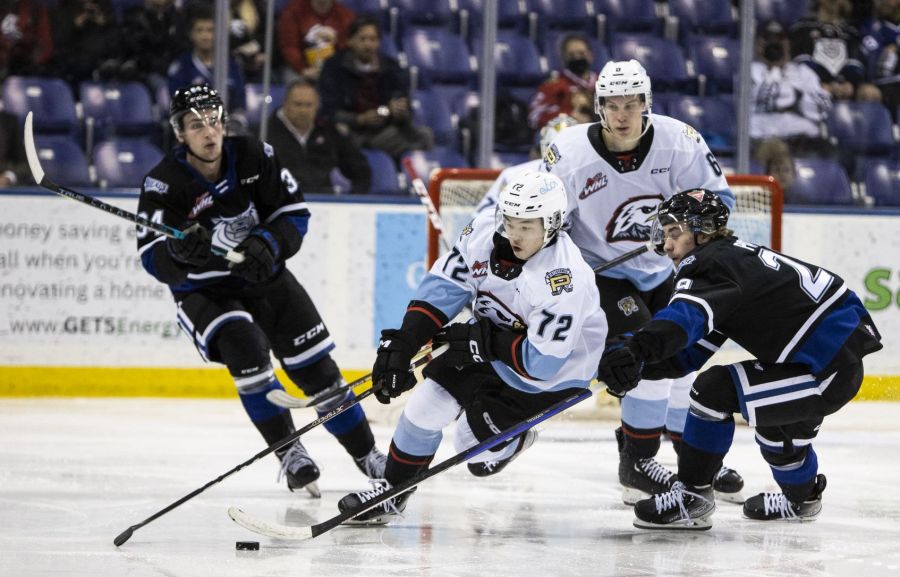 The game also saw a strong performance by newly-acquired goaltender Nicholas Christiano, who made 25 saves on 29 shots, allowing just one goal over the first two frames before the Winterhawks scored twice in the third to seal the win.

Forward Gabe Kalssen would collect the game-winner for Portland, scoring on the powerplay early in the third period. Meanwhile, Winterhawks netminder Jan Špunar had a strong performance of his own, stopping all but one of the 30 shots he faced.

Dereniwsky (4) scored at the 2:52 mark of the first to give Victoria (3-19-3-0) an 1-0 lead early in the game. Defenceman Justin Kipkie and forward Teydon Trembecky would count the assists on the play, marking Trembecky’s first point as a member of the Royals.

The score would remain 1-0 for Victoria until the 0:27 mark of the second period when Portland (18-4-1-1) forward Jack O’Brien (7) tapped in a rebound to tie the game at 1-1, where it would stay headed into period three.

The Winterhawks would take their first lead of the game at the 3:28 mark of the third on a powerplay marker by forward Gable Klassen (16), which would become the eventual game-winner.

That would be followed by another powerplay goal by defenceman Ryder Thompson (2) at 4:49 of the third to give Portland a 3-1 lead, where it would remain until the final buzzer.

Looking ahead, Portland will take a short trip north for a matchup against the Everett Silvertips tomorrow night, while the Royals will also remain on the road as they travel to Kent, WA for a contest against the Seattle Thunderbirds, scheduled for 6:05 pm on Saturday, Dec. 3.