Victoria Royals forward Brayden Schuurman and defenceman Jason Spizawka each celebrated their 100th WHL game in a 3-0 loss to the Kamloops Blazers on Tuesday at the Save-On-Foods Memorial Centre. 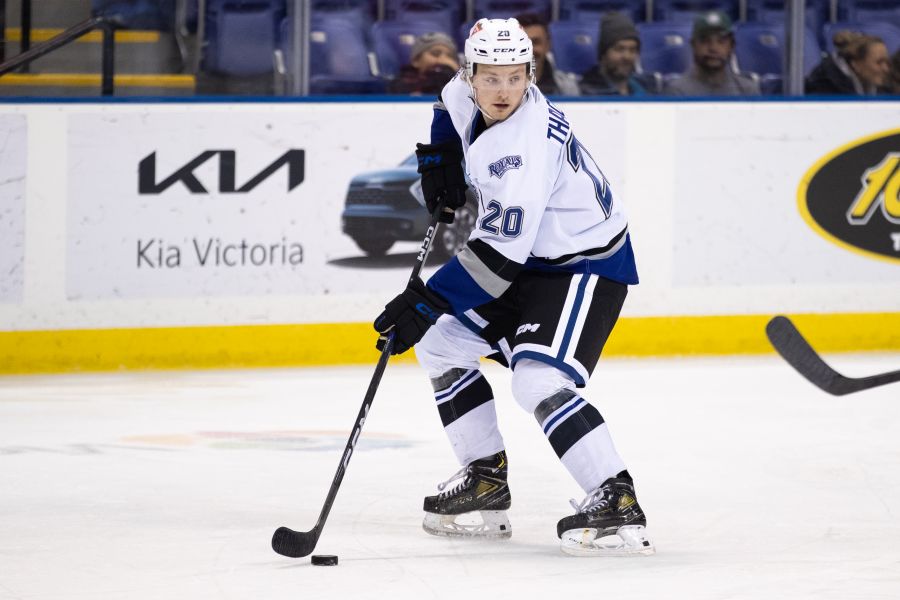 Both Spizawka (19th overall) and Schuurman (69th overall) were selected by the club in the 2019 WHL Prospects Draft, and rank among the longest-tenured Royals on the current roster.

Despite the final score, Victoria (3-21-3-0) benefited from another strong performance from recently-acquired goaltender Nicholas Christiano, who has held opponents to three goals or less for three consecutive starts. The Langley, BC product made 28 saves on 32 shots in the loss on Tuesday.

On the other end, Blazers goaltender Dylan Ernst stopped all 17 shots he faced on the way to recording his second consecutive shutout.

Forward Caedan Bankier and defenceman Logan Barios led the charge on offence for Kamloops in the win, each recording two points on a goal and an assist.

The Blazers would extend their lead in the second, with Bankier (19) scoring at the 11:32 mark to bring the score to 2-0.

Kamloops would add a third goal in the final period, with Barios (3) scoring at the 8:24 mark to put his team up 3-0, where it would stand at the final buzzer

The Blazers and Royals will face-off once again tomorrow night as they wrap-up their two-game midweek set.

Puck-drop for that contest is set for 7:05 pm on Wednesday, Dec. 7 at the Save-On-Foods Memorial Centre in downtown Victoria.