Victoria Royals forward Riley Gannon scored a goal in his 150th career WHL game during a 8-3 loss to the Moose Jaw Warriors at the Save-On-Foods Memorial Centre on Tuesday. 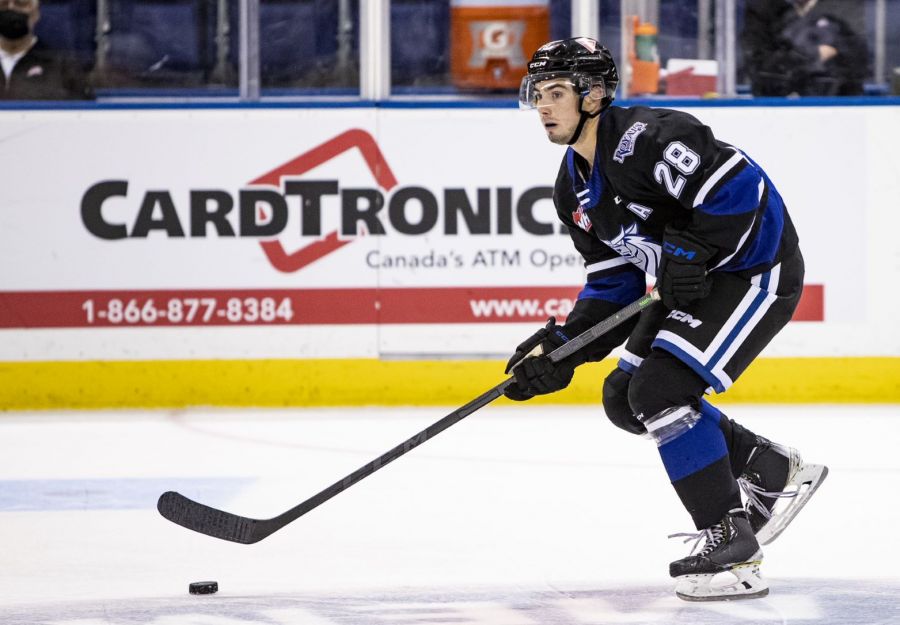 The Nanaimo product is the longest-tenured Royal on the roster, having made his debut for the team as a 17-year-old during the 2019-2020 season. He has tallied 52 total points on 29 goals and 23 assists during his time in Victoria.

“He’s a tremendous player and a tremendous person,” said Coach Price postgame. “He’s a great leader on the team, you can see he plays in every situation – powerplay, penalty kill, all three forward positions and he’s just an unbelievable person. He’s been a huge contributor and a great addition to our team.”

Forwards Alex Thacker and Brayden Schuurman collected the other two goals for Victoria in the defeat. Schuurman now has three goals in his past two games since returning from injury and has scored at least once in his six total appearances for the team this season.

Goaltender Nicholas Cristiano, who was making his first start for the Royals after being acquired from the Kelowna Rockets on Monday, stopped 34 of the 42 shots he faced in the contest.

On the other side, Warriors defenceman Denton Mateychuk led the way with a five point night, recording one goal and four assists, while starting goalie Connor Ungar made 21 saves on 24 total shots in the game.

Forward Brayden Schuurman (2) gave Victoria (3-18-3-0) an early 1-0 lead with his second goal in as many games at the 0:49 mark of the first, with forward Alex Thacker and defenceman Justin Kipkie collecting the assists.

That would be followed by a go-ahead goal from Warriors forward Jagger Firkus (16) at the 19:34 mark, putting his team up 2-1 heading into the second period.

Moose Jaw would open up a three goal advantage early in the second, with forward Harper Lolacher (2) scoring at the 1:56 mark.

The Warriors would add two more before the end of the frame, the first coming off the stick of forward Atley Calvert (11) at 10:28 and the second from forward Ryder Korczak (3) at 19:03 to give the visitors a 5-1 lead entering the third.

The Royals would get one back on a short-handed marker by Riley Gannon (6) at 13:48, with Tanner Scott on the assist. However, Moose Jaw would soon respond with their eighth goal of the night by forward Nathan Pilling (6) at the 18:22 mark.

Victoria would add one more before the final buzzer, coming off the stick of forward Alex Thacker at 18:40 to bring the score to 8-3 where it would stand at the end of the game.

Looking ahead, the Warriors will continue their tour of the BC Division with a matchup against the Vancouver Giants tomorrow night, Nov. 30.

Meanwhile, the Royals will take the next two days off before heading south of the border for a pair of road tests against the Portland Winterhawks on Friday, Dec. 2 and the Seattle Thunderbirds on Saturday, Dec. 3.