Jeevan Sihota, age 17, has been named Junior Player of the Year by the Pacific Northwest Golf Association after an electric 2021 season. 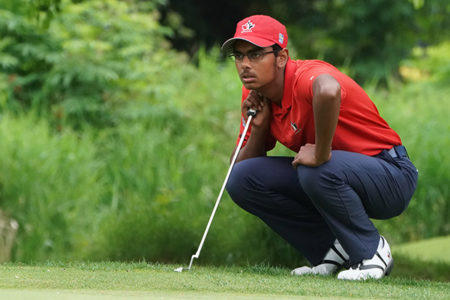 Sihota has long been one of the best young golfers in the country, winning a BC Juvenile Championship and finishing in the top 40 in the Canadian Men’s Amatuer championship as a 13 year-old back in 2017. His list of accolades has only grown since.

This past year he tied for second overall at the Mackenzie Tour Reliance Properties DC Bank Open—a pro tournament which he played in as an amateur—and won the Golf Canada Junior Squad Selection Camp Tournament held at TPC Toronto this past August. Sihota also recorded a pair of top 10 finishes at the Canadian junior Boys Championship and the Mackenzie Tour ATM Financial Classic this year.

The Victoria native is regarded for his ball striking ability, which has been described as “Brysonian”, in reference to PGA Tour pro Bryson DeChambeau, who is one of the top long-ball hitters in golf today. DeChambeau made headlines in the spring of 2020 for bulking up with a strict workout regimen during the brief break the PGA tour took during the early months of the pandemic. When golf returned, he was hitting the ball farther and faster than anybody on the tour.

This was an approach shared by Sihota, who himself made headlines for shooting a ball nearly 350 yards across the water on the 18th hole at TPC Sawgrass in Jun. 2020. Sihota also routinely hits the ball faster and longer than his opponents, something he again shares with DeChambeau. Not bad for a kid who has yet to graduate high school.

The question with Sihota is when, not will, he turn pro.

Already one of the top amateur golfers in Canada, he has all the makings of a household name in Canadian golf, and you should expect to see him near the top of leaderboards for years to come.