The Victoria Royals are set to hit the road this weekend for a pair of matchups against two BC Division rivals, the Kelowna Rockets and Kamloops Blazers. 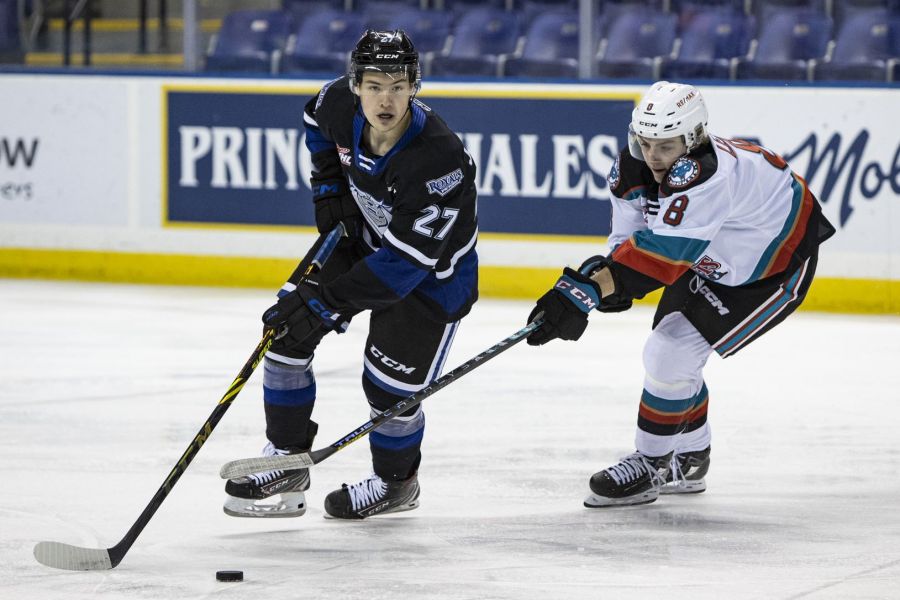 Victoria is riding high after defeating the Blazers 5-2 in the back half of a two game midweek set on Wednesday and will look to replicate that success in their third matchup of the week with Kamloops this Saturday.

However, the team’s more immediate task will be finding a way to beat the Kelowna Rockets, who they are set to face at Prospera Place on Friday night.

Forward Jake Poole will look to stay hot against his former team after posting two goals and an assist to lead the Royals in their win over Kamloops earlier this week. The 20-year-old currently leads the team in scoring with 26 points (15 goals, 11 assists) in 26 games this year and has posted three-points-or-more in four contests since arriving in Victoria in early October.

Another former Rocket-turned-Royal who will look for success against his former club this weekend is goaltender Nicholas Cristiano, who was acquired by Victoria in a trade with Kelowna last week.

The 18-year-old netminder has impressed since his arrival on the Island, holding opponents to three goals or less in four consecutive starts, while playing a key part in Wednesday’s victory with 25 saves on 27 shots against the dangerous Kamloops offence.

The Rockets and Royals have met three times in 2022, with Kelowna owning a 2-1 advantage in the season series.

Forward Andrew Cristall remains Kelowna’s most dangerous weapon on the ice, tallying 45 points on 18 goals and 27 assists on the season, which ranks second behind only Regina’s Connor Bedard for the most by any WHL skater this year.

The Rockets also benefit from the strong goaltending duo of Talyn Boyko and Jari Kykkanen.

The 18-year-old Kykkanen has made the majority of starts for Kelowna this year and owns slightly better numbers with a 5-6-0-1 record, 3.14 goals against average (GAA) and a .898 save percentage (SV%) in 12 appearances.

Following Friday’s contest in Kelowna, Victoria will head north to face Kamloops for the third time in five days on Saturday.

The Blazers will be without their top two leading scorers in Caedan Bankier and Logan Stankoven this weekend, both who have departed to join Team Canada's Selection Camp ahead of this year’s World Junior Championships.

However, Kamloops has plenty of talent in reserve, such as 18-year-old forward Matthew Seminoff, who ranks third behind Stankoven and Bankier for the team-lead in scoring with 24 points (10 G, 14 A) on the season.

Goaltender Dylan Ernst has been the main starter in net for Kamloops this season and appeared in both contests for the team against Victoria earlier this week.

The 2004-born netminder looked nearly unstoppable as he posted his second consecutive shutout during the Blazers’ win on Tuesday, however, Victoria was able to beat him twice the following night when he came in midway through the game in relief of backup Michael Schnattinger.

The Royals’ first game of the weekend is set to begin at 7:05 pm on Friday, Dec. 9 at Prospera Place in Kelowna, with game two getting underway at the same time on Saturday, Dec. 10 at the Sandman Centre in Kamloops.