Rainstorms of increasing intensity are forecast to hit British Columbia over the coming days, prompting warnings for people to be prepared to evacuate.

Public Safety Minister Mike Farnworth said the biggest storm is expected to arrive Tuesday and people living in areas prone to flooding should be on alert.

"The time to prepare is now," he told a news conference Thursday.

Farnworth urged people to have food, water, blankets and flashlights ready in case of rising waters in their communities, as a second storm in a three−storm series is to arrive Saturday.

The warning came as Prime Minister Justin Trudeau was preparing to visit the flood−damaged city of Abbotsford before meeting Friday afternoon with Premier John Horgan in Victoria.

Trudeau’s schedule shows he will also meet with members of the military, first responders and volunteers in the Fraser Valley and get a first−hand look at some of the flooding that occurred two weeks ago. 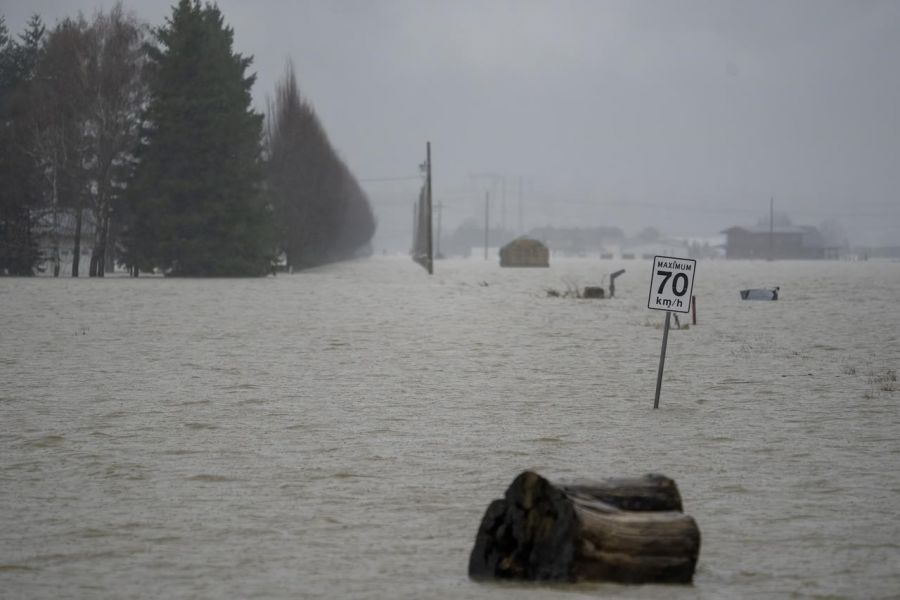 Surging rivers and heavy rain caused floods and mudslides that damaged and closed some major highways, forced the evacuation of the city of Merritt and left low−lying sections of the Abbotsford−Chilliwack area, the heartland of BC’s poultry, egg and dairy industries, under more that two metres of water.

Six people have been killed or are missing.

Some evacuees in Abbotsford and Merritt were allowed to return to their homes earlier this week and officials in Merritt said more evacuees from that southern Interior city can head home Saturday.

Work to restart a key oil pipeline has been delayed, Trans Mountain Corp., said Thursday in a post on its website.

The company, which operates the Trans Mountain pipeline between the Edmonton area and Burnaby, said plans to resume operations this week have been dropped.

"With the continued deterioration of weather conditions in the region in the coming days, Trans Mountain is closely monitoring the situation to ensure our crews can continue to progress safely," the statement said.

One day earlier, the company had said it was optimistic it could restart the pipeline at a reduced capacity by the end of the week, moving crude oil to a refinery that is the main supplier of gasoline products for Metro Vancouver.

The pipeline remained "safely in a static condition," the company said, as more than 400 workers and 100 pieces of equipment were assigned to repair duties.

"Our focus has shifted to complete repairs to ensure integrity of the line where it has been exposed and impacted by flooding and debris," said Trans Mountain.

A lack of crude oil forced the Parkland refinery in Burnaby to pause operations until the pipeline reopens and the closure, along with other supply chain issues, prompted the provincial government to impose gas rationing for Vancouver Island, Metro Vancouver and the Sunshine coast, limiting drivers to 30 litres per fill up.

Environment Canada said the first of the three expected storms had eased by early Friday, but had drenched the Abbotsford area with 55 millimetres of rain since Wednesday night.

Weather office data shows the storm also brought 193 mm of rain to the Tofino area of Vancouver Island but only 35 mm to Hope, the entry to the Coquihalla Highway, the major route that connects the Lower Mainland to the B.C. Interior.

Transportation Minister Rob Fleming said about 20 sites along the highway from Hope to Merritt had been badly damaged and five bridges were either collapsed or had serious structural issues.

"We’re reasonably optimistic that enough temporary repairs can be completed to allow commercial traffic on the corridor in about two months time, by late January."

Everything depends on the weather when re−establishing vital highway links and interrupted supply chains, said Fleming. But he noted a major section of the Trans−Canada Highway between Abbotsford and Chilliwack had reopened.

The Trans−Canada Highway through the Fraser Canyon remained closed, along with Highway 8 between Spences Bridge and Merritt. But Highway 3 from Hope to the Interior was open, as was Highway 7 between Agassiz and Hope.

The federal government and Vancouver Fraser Port Authority said they are working together to address supply chain disruptions, with Ottawa contributing up to $4.1 million to ease bottlenecks at Vancouver ports.

Farnworth said the expected storms on Saturday and Tuesday have emergency officials making preparations in the Sumas area of the Fraser Valley, where major flooding has already occurred.

"The focus right now is on the flood−impacted areas where the ground is saturated and dikes have been under pressure," he said.

"The entire region is getting the attention and the focus to make sure that not only are crews there but the equipment, the sandbags, of which I think about two million are in place to be able to deal with the weather events we are seeing."