A public warning has been issued due to a threat to the public posed by 11 individuals for alleged involvement in ongoing gang conflicts.

The Combined Forces Special Enforcement Unit of BC (CFSEU-BC) issued the warning Wednesday morning, advising that “anyone with, or in, the proximity to these individuals may be putting themselves at risk.”

All 11 men are known to BC RCMP and have allegedly been connected with high levels of gang and organized crime-related violence, according to a release from the CFSEU.

Descriptions and images have been released for the following men: 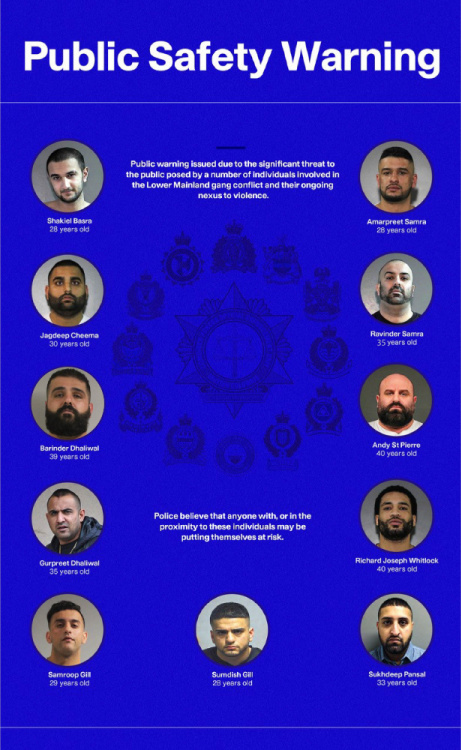 The news release explains that police agencies across the Lower Mainland are aware of several conflicts that have resulted in murders and attempted murder in recent months.

“Those engaged in the LMDGC are not bound by jurisdiction or contained within the Lower Mainland; they travel throughout the province committing gang related acts of violence and may be targeted themselves by others also involved in the conflict,” says assistant commissioner Manny Mann, CFSEU-BC chief officer.

“The very public and brazen gang-related violence in our communities is unacceptable and will not be tolerated.”

The CFSEU, BC RCMP and multiple police departments across the Lower Mainland are collaborating and working together to dismantle these types of conflicts.