British Columbia and Ontario continue to be the most expensive provinces to rent a room, or rooms, in Canada.

The two provinces dominate the list when it comes to the top 10 most expensive rental markets.

While Vancouver has overtaken Toronto as the most expensive rental market in Canada, both cities have seen prices drop significantly since this time last year.

Alberta's major cities managed to steer clear of the top ten, with Calgary and Edmonton ranking 17th and 20th respectively, both down multiple spots from the same time last year.

In Calgary, one bedroom units average out at $1,100 a month, while in Edmonton the average cost of a one bedroom home is $910. 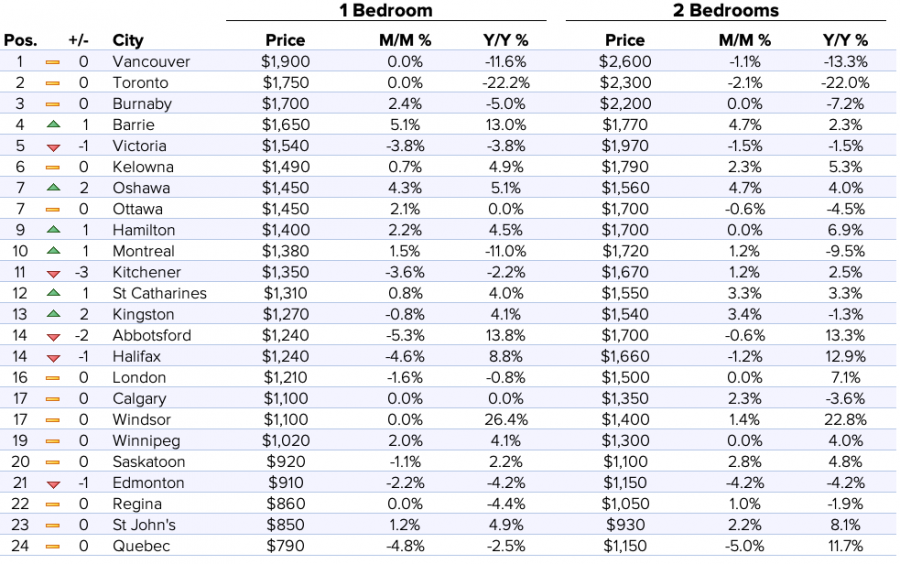 One bedroom units in Abbotsford experienced the largest monthly decrease in prices, falling two spots to 14th at a median price of $1,240.

Meanwhile, Oshawa experienced the largest monthly growth rate in the nation, jumping 4.3% to settle at 7th in the nation.

"For the first time since January 2020, one-bedroom rents in both Vancouver and Toronto were flat on a monthly basis. (Though rent prices were still down in the double-digits year-over-year.)," reads Padmapper's report.

"These flat rates may be a result of a recent migration of renters who never lived in these pricey cities but wanted to take advantage of the cheap rent and unheard of move-in specials currently being offered. These new renters moving in evens out the overall demand so we aren’t seeing the trend of continuous decline in rent prices anymore."